The Xbox is a sixth-generation video game console manufactured by Microsoft. First released in 2001, it was Microsoft's first foray into the gaming console market, and it competed with Sony's PlayStation 2, Sega's Dreamcast, and Nintendo's GameCube. The integrated Xbox Live service allowed players to play games online.

Dead or Alive titles on Xbox[]

On March 25, 2004, for the release of Dead or Alive Ultimate, a limited edition Xbox was released in Japan, known as the Kasumi-chan Blue Xbox.

The console was a standard Xbox console system with a translucent blue case (based on Kasumi's iconic blue costume), and the "Dead or Alive Ultimate" logo printed in white in the lower left corner on the top of the case. The console also came with a matching controller, an Xbox DVD Kit, an Xbox Live Starter Kit with a free one-year membership, a copy of Dead or Alive Ultimate, a copy of Digital Venus, and a 5" body pillow case with a image of Kasumi.

In Germany 20 DOA Xboxes were sold. 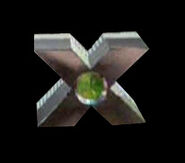 The commands in Dead or Alive 3 were colored to match the controller's face buttons:

. This has remained consistent for the rest of the series, even on other platforms.