Venus on the Beach Figurines

"Venus on the Beach" is a series of limited edition figurines, based on the girls of the Dead or Alive series as they appear in Dead or Alive Xtreme 2 (except Helena, Christie, and Lisa). The 1/6 scale figurines are made from PVC and ABS plastics, and are fully painted. The figurines can be removed from their bases, and also include changeable, snap-on swimsuits, which appear in Xtreme 2. The figurines can cost from about ¥7,800 to ¥16,800 ($90 - $200).

The Ayane figurine is 250mm tall. She is in a standing position in swallow water, stretching her right leg as she leans on a rocky support with her left hand. Ayane comes with the Colt tank-top and mini-skirt, which can be removed to reveal the Bellatrix bikini, or the Scorpion which reveals the Alphard. 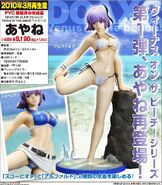 The Hitomi figurine is 200mm tall. She is in a sitting position, sat upon the inflatable killer whale pool toy, which is supported on a white stand. There are two editions of the Hitomi figurine: one comes with the Delphinus outfit and the Impets underwear, and the other with the the Crux outfit and Gremlin underwear. 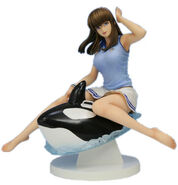 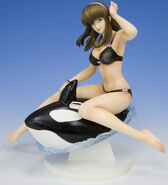 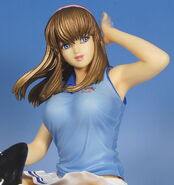 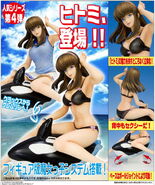 The Kasumi figurine is about 195mm tall. She is in a crawling position on a pool-like base, looking as if she is climbing out, with her right foot still in the water. One edition comes with the Thistle and Sunflower swimsuits, and has loose hair. A second edition comes with the Gentain and Lavender swimsuits, plus an additional hair piece, which changed her hair from loose and flowing, to a high ponytail. 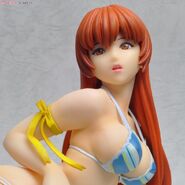 The Kokoro figurine is about 180mm tall. She is in a kneeling position, on a circle base designed to look like the shore line. One edition comes with the Apple bikini and Citron outfit. The other has the Star Fruit and Cassis suits. Both editions comes with a red and white Japanese parasol, which can be removed. 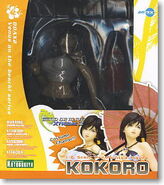 The Leifang figurine is 250mm tall. She is in a sitting position on a rudder ring, as if she is doing down the Water Slide. There are two editions of the Leifang figurine: one has braided hair, is sitting on a pink ring, and comes with the Bunting cheerleader outfit and Atropos bikini. The other has loose hair, is sitting on a blue ring, and comes with the Partridge cheerleader outfit and Daphne bikini. 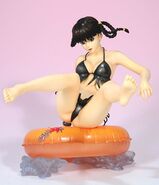 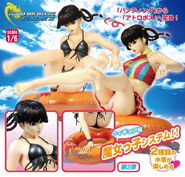 The Tina figurine is 250mm tall. She is in a diagonal diving position, supported on a base designed like grey coral. One edition has the Sculpter outfit and Fluorite underwear. The other has the Grus outfit and Moonstone underwear. 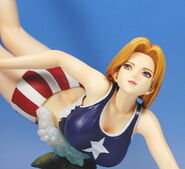