Owner mode is a gameplay mode for Dead or Alive Xtreme 3, both in Fortune version and Venus version.

The premise behind the mode is that the player owns their own island, where they can spend time befriending a girl on the island. Her friendship is dependent on her satisfaction level. When it is high enough, she has enough positive feelings for you that she'll change her attire in front of you. During this time you also have to close your eyes and if you time opening them right, she'll be wearing a new swimsuit but open them too soon and you will see an image of the girl covering herself. 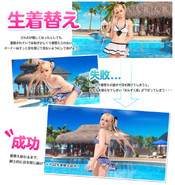