A staple long-range dagger-like weapon used by shinobi, the kunai is traditionally a large triangular dart that can be modified to suit different purposes. They can be either used as daggers or throwing weapons. When they are used as throwing weapons they are sometimes called shuriken.

As Ryu Hayabusa traverses from area to area in Ninja Gaiden, a kunai with a purple iris attached will be thrown by Ayane into Hayabusa's vicinity on a wall or on the floor. The kunai will have a folded-up scroll tied to the dagger and will usually offer advice, tips, or even a foreshadowing of events to come.

Shaped like a kunai, or throwing knife, this shuriken has a small explosive attached. The Incendiary Shuriken is designed to explode after being impaled into the target’s body. To achieve this, the thrower must remove the small metal ring at the tail end of the weapon, thereby lighting the fuse. Although the history of this weapon is as old as gunpowder itself, recent improvements inspired by modern grenade design have made it all the more lethal.

A notable weapon in Hayabusa's arsenal, Ayane also possesses a personalized variant of this weapon in Ninja Gaiden II, attaching a purple iris flower that spins when in flight, which are known as "Flash Kunai." 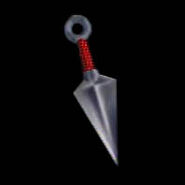 Kunai in Dead or Alive Hardcore 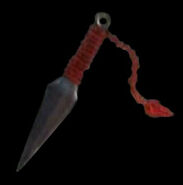 Kunai in Dead or Alive Ultimate

Retrieved from "https://deadoralive.fandom.com/wiki/Kunai?oldid=105876"
Community content is available under CC-BY-SA unless otherwise noted.