The Kasumi Max Factory Figurine is a 1/6 scale PVC figurine of Kasumi, designed by Katayama Hiroki. The original run of the figurine was first released by Max Factory in December 2004, and was followed by a reprint in July 2005, then two limited editions in 2006 and 2007, and an upgraded version in 2020.

The figurine is 200mm (7.8 in) in height and stands on a PVC octogonal base with a light wood design. The design of the figurine has Kasumi wearing her trademark dress from the Dead or Alive series, as she leans forward, pulling at the hem of her right stocking, right foot slightly raised onto her toes. She is looking towards the right with a suprised expression, and her loose hair is drapping over her left shoulder.

The first version of the figure had the dress, shoes, and arm-guards in its normal blue colour, white hems, and red decorations on her sword, which is secured on her back through her white belt. The second version "Costume 2" is fully white with red hems and belt, and yellow sword decorations. The third version is a black version of the outfit, with gold hems and decorations, with a pink belt and yellow bends around the wrists.

The final version of the figure, called "Hollywood Blue", with a power blue outfit with white hems, and dark purple wrist bands and sword decorations. It was possible that it was created for the Japanese release of the feature film DOA: Dead or Alive, hence the name.

In 2020 the white version of this figure recieved an update called the Refined Edition, featuring better materials and overall more detail in Kasumi's costume. 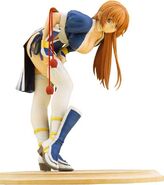