Dead or Alive Wiki
Register
Don't have an account?
Sign In
Advertisement
in: Articles for Improvement, Articles in need of images, Articles being constructed,
and 21 more

"My fists only get stronger with age."
—Gen Fu in Dead or Alive 5

Gen Fu (Chinese: 元福[1], pinyin: Yuán Fú) is a bookstore owner and a master of xinyi liuhe quan from the Dead or Alive series, who first debuted in the first Dead or Alive. He joined the Dead or Alive Tournaments to help his sick granddaughter, Mei Lin, but as of Dead or Alive 4, he no longer needs to join the tournaments, since Mei Lin is back to full health and the doctor's bills are paid off. He is also the mentor of Eliot.

Gen Fu was a humble book store owner and master of Xinyi Liuhe Quan; a powerful and dangerous martial art involving the use of the hands and upper body. The Xinyi Liuhe Quan master became well known for possessing the iron fist, a legendary attack known for its awesome destructive power. He lived out his days in solitude and peaceful tranquility, looking after his young granddaughter, Mei Lin. At some point during the years, he took on Eliot as an apprentice; why he chose Eliot is a mystery, even to the boy himself.

When Mei Lin contracts a terrible disease, Gen Fu enters himself into the first Dead or Alive Tournament, intending to use the prize money to pay for her costly treatment.

During Fame Douglass's announcement of the tournament in the Freedom Survivor, he encounters Zack as he wants to take the prize money to Las Vegas and tells him, "Fool, my granddaughter's life is all that matters!" Zack then says that he can double the money once he has won it. Gen Fu shouts in disbelief, "Impossible!"

During the tournament, he is approached by Leon, who says "I won't hold back, old man". Gen Fu replies, "Don't take me lightly, young man." and he power stomps the sand which blows in Leon's face. They battle.

Next, Gen Fu has to fight Helena Douglas, who asks why he's in the tournament. Gen Fu tells Helena that he wants to win the prize money to save Mei Lin, however, when Gen Fu asks her the same question, she tells him it's none of his business, which leads to their battle. Gen Fu loses to Helena but heads to defeat the Tengu anyway. In his ending, he is shown defeating the Tengu and taking its nose, hoping it will save Mei Lin, as the creature's nose is reputed to cure any diseases.

Thanks to the prize money that Gen Fu won in the second tournament, Mei Lin is making a steady recovery. However, to complete the surgery and pay for a full rehabilitation, Gen Fu again needs a vast sum of money. For this reason, Gen Fu fights yet again. It is implied that Gen Fu ranked second place in the third tournament.

During the tournament, Gen Fu trains Eliot in China to hone his fighting skills. They encounter Hayate and Ayane and he asks them for a tag duel, wanting Eliot to have experience with fighters with different techniques.

Since Mei Lin is fully recovered, Gen Fu has no reason to compete in the fourth tournament. Eliot, now sixteen years old, goes on to fight in the tournament to prove himself worthy as Gen Fu's apprentice. When the boy returns he asks for a fight against Gen Fu himself. Eliot wins, proving to himself that he is worthy.

Once again, Gen Fu does not compete in the fifth tournament. However, in China, he appears before Eliot after the tournament. Gen Fu tells his apprentice that he has mastered xingyi quan and that he'll teach him his own technique: Xinyi Liuhe Quan. Gen Fu warns Eliot that the training will be a bit harder this time around, but the young apprentice happily accepts the challenge. By the time of the sixth tournament, Eliot had begun to incorporate Xinyi Liuhe Quan into his fighting style. 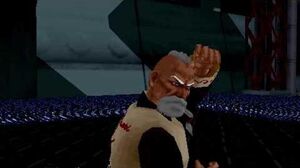 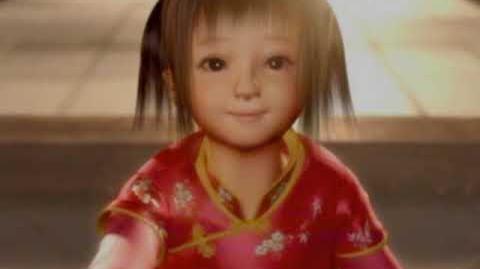 Gen Fu has had the same general appearance since his debut, he's an elderly man who seems surprisingly in shape for a man his age. He has a normal height and build and has tanned somewhat wrinkled skin and a thick white beard that covers his chin, mouth and upper lip. He has long waist length hair but due to age, he's balding on the side of his head and his hair is greyish white so he keeps it braided in a long braid similar to Kasumi's. He has small light blue eyes and always seems to have a serious focused expression on his face.

His main attire consists of a long sleeved baggy martial arts top with striped fur sleeves and pants with the same design and kenpo shoes. His other attires include other similar outfits but he can also dress casually, as seen in his casual DLC where he dons a suit and he also has a beach outfit where he wears a Hawaiian shirt and shorts and a beach hat and shades and sandals.

In Dead or Alive 5, his appearance is made more realistic but the changes are pretty tame, although his main outfit is now a white variant of his fur kenpo outfit without the fur and he wears a Chinese hat with it as well. His other attires are as previously stated.

Gen Fu is very much an honorable man, as well as a model martial artist. He is wise and kind-hearted, but somewhat gruff and closed compared to other fighters in the tournament. Much like Ryu Hayabusa, he adopts a tranquil nature, much akin to water; free flowing most of the time, but unforgiving and crushing when roused. Furthermore, Gen Fu is very articulate. He paints, writes poems and ponders on the philosophical aspects of his martial art as well as on that of the world around him.

Gen Fu and Helena were partners in Dead or Alive 2 and worked together. Gen Fu asked Helena why she joined the second tournament and instead of replying to the question, Helena said it was none of his business. However, Helena seems to like Gen Fu; even offering to pay for his granddaughter, Mei Lin's operation.

Gen Fu and Eliot have a master/apprentice relationship; Eliot has a great deal of respect for his master and always wanted to prove himself worthy to him. Gen Fu may also accept him somewhat as family as he trusts Elliot around his granddaughter, Meilin, who refers to him as a big brother.

In the third tournament Gen Fu meets Brad Wong. Brad had heard about the master possessing the "Iron Fist" through word-of-mouth stories, although Gen Fu assures him that his power is not fairytales. In Dead or Alive 4, Brad tells Eliot that he should pity Gen Fu because he had been "lonely" all his life. Brad possibly has respect for the old master.

At the third tournament, he encountered Hayate and Ayane while training his apprentice, Eliot. Hayate seems to have a lot of respect for Gen Fu, going as far as to compliment him for still being strong despite his age, to which he replies, "I'm not that strong, I'm just the best" proudly.

Gen Fu, although slow, is very powerful. His single strikes alone can do massive damage (such as his Ugyu-Haito). Gen Fu's holds and throws are also above average in damage and versatility (his Unpei-Nichigetsu-Ha throw is an excellent tiger knee for air-juggles, for example). His forward + P-esque attacks result in massive damage, but his attacks rely on timing and presentation due to his slow recovery time and execution, and because most of his attacks are mid-level, making him somewhat predictable. His preferred range is up close, as several of his more powerful strikes have a damage bonus when used point-blank, making some of them more powerful than many characters' throws. He has relatively few kicks, but most of them are surprisingly quick and good for creating critical stuns. He is quite compatible with Kasumi, Ayane and Helena, as their speed and combo-potential compliment his power and more limited number of combos.

The following are Gen Fu's official stats as listed in the games.

Gen Fu is an unlockable character in Dead or Alive 4 and Dead or Alive 5, and he can be used in every gameplay mode except Story Mode. To unlock him:

Gen Fu appears in DOA: Dead or Alive, portrayed by Fang Liu. In the movie, Gen Fu can be seen fighting Leifang. He also has a brief fight with Kasumi where she paralyzes Gen Fu, but the scene was left out of the film. It is featured among the deleted scenes on the DVD.

The following are the music themes used for Gen Fu throughout the series.

Note that both the Dead or Alive++ and Dimensions themes have no official names.