Dead or Alive Wiki
Register
Don't have an account?
Sign In
Advertisement
in: Dead or Alive 4 stages, Stages with hazards, Locations

Gambler's Paradise is one of the stages in Dead or Alive 4. It is designed to look like an American "resort city", with places for gambling and late night entertainment. It might have been based on the internationally renowned resort city, Las Vegas. According to one of the signs, the city may be called, or at least be known as, "Heaven and Hell City".

The stage is not a major location for events, but it does appear in Leifang's and Bass Armstrong's stories; when Bass loses at the casino, he takes his anger out on the innocent publicly. Leifang, who happened to be around at the time, steps in and teaches Bass a few manners. The outcome of the fight is unknown.

The fights take place on a stretch of road in the heart of the city at night, with a casino on one side, and the large "Hotel Paradise" on the other. The DOATEC headquarters can be seen in the distance down the road. Suggested by the ripples in the puddles on the road, there is a light rain shower.

Down the middle, separating the two sides of the road, there is a section of grass with palm trees. The sidewalk is blocked off by railings, but people can be seen walking, or even watching the fighting; if someone hits the sides, the people react and jump away. Cars, including a taxi and police cars, speed up and down the road, which can also be a hazard to the fighters, although, most of the time, they would try to avoid the fights if they can.

The buildings along the road are covered in bright, colorful neon and flashing lighting, with electronic billboards and signs, advertizing shows among over things. A few of the signs bare reference to the Xbox 360, or the Dead or Alive series. These signs include: 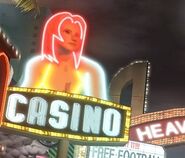