The Dragon Sword (龍剣; Ryuken; AKA the Sword of the Dragons) is the primary weapon of Ryu Hayabusa in the Ninja Gaiden video game series. A formidable weapon, the Dragon Sword is a katana possessing the essence and powers of the dragons.

The sword was created from the fang of the Dragon God. Powered by the spirits of the Twelve Dragons, it was used against the Dark Dragon by the founding members of the Dragon Lineage, to which the Hayabusa Clan hold their lineage. It has since been passed down the bloodline through millennia, up until the present day where Hayabusa is its current wielder. The sword is constantly kept in its inert stage; in order to "awaken" the blade, the Eye of the Dragon jewel must be placed in its hilt, thusly becoming the True Dragon Sword (真龍剣; Shinryuuken). 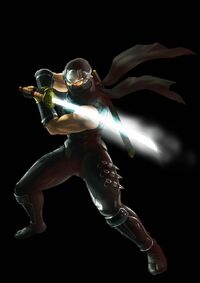 When the Dragon Sword was created, the 12 dragons who imbued the sword with their essence allowed the Hayabusa Ninja Clan to carve a magatama jewel out of one of their crystal-like eyes. This magatama became known as the Eye of the Dragon. To defeat the Dark Dragon and seal the Evil Deities, the Eye was fitted into the hilt, awakening the Dragon Sword, and giving the Dragon Lineage the power to defeat the Evil Deities and slay the Dark Dragon. Only those of the Hayabusa Ninja Clan who were true master warriors could wield the sword, lest their souls be overcome by the sword's incredibly powerful aura.

Because of its godly powers the True Dragon Sword was seen as a threat to the balance of the world, and so it became customary for the jewel and sword to be in two separate locations; the Dragon Sword held by the Hayabusa Clan Leader, and the Eye of the Dragon guarded by the Dragon Shrine Maidens. However, both factions would eventually meet and merge into a single clan, resulting in the two artifacts staying in close proximity to each other.

By getting a 1,000 pt Gamerscore in Halo 3, the player can unlock the Dragon Sword to be attached to the back of the Spartan Hayabusa chest armor. However, the sword is only decoration and can not be used as a weapon.

Hayabusa makes a guest appearance in the PlayStation 3 version of Dynasty Warriors: Strikeforce, offering quests to the player. If the player completes all of his challenges they earn the right to wield the Dragon Sword in battle as an obtainable weapon.

Retrieved from "https://deadoralive.fandom.com/wiki/Dragon_Sword?oldid=100116"
Community content is available under CC-BY-SA unless otherwise noted.