Dead or Alive Wiki
Register
Don't have an account?
Sign In
Advertisement
in: Featured articles, Games, Dead or Alive Xtreme Games,
and 2 more

Unlike previous Dead or Alive games before it, Dead or Alive Xtreme is "a sports game" as opposed to a fighting game, featuring the female brawlers of the series playing volleyball, pool and gambling games as they spend a two-week vacation on a tropical island. The game also puts a big focus on collecting, socializing, and gift giving. It was the first Dead or Alive game to be given mature ratings in most regions for its depictions of busty women in skimpy swimsuits, both on and off the beach.

Taking place after the events of Dead or Alive 3, Zack had gambled his winnings from the third tournament at a casino and hit the jackpot, earning a ridiculously large sum of money. With his girlfriend Niki, he used the money to purchase a private island, which he promptly names after himself: "Zack Island".

He then invited the women from the third tournament to his island, under the pretense that the next Dead or Alive Tournament will be held there. The women arrive and after discovering the truth, namely that it was merely a hoax, decide to make the best of the situation by spending two weeks vacationing on the island.

At the end of the holiday, the ladies depart, leaving only Zack and Niki on the island. Shortly thereafter, the island's volcano - previously thought to be inactive - spontaneously erupts, threatening to destroy Zack's island. In the chaos, Niki escapes using Zack's jetpack and leaves him behind. Zack survives the volcanic eruption, but the island itself is completely destroyed.

The playable characters consist of the seven female fighters from the previous Dead or Alive titles, plus a new character, Lisa, who made her first appearance in this game.

The volleyball players consist of:

The non-playable characters include:

In Story Mode, players select a character to play as for the duration of the two week period. Since the volleyball matches are always two-on-two, the player automatically begins with a partner. Each day, players can select one activity in the morning, one in the afternoon, and one in the evening.

All money (known as Zack Dollars) earned in the game carries over between vacations, so that unspent dollars can be used by a different character selected on the next play-through. Similarly, all swimsuits acquired by a given character remain with that character for all future play sessions. Since each character has access to a different set of swimsuits at the shop, the majority of suits for each character can only be acquired as gifts.

Playing volleyball is done primarily through the use of two buttons, one designated for spiking and blocking, and the other for receiving or setting. As many of the actions happen automatically (e.g., jumping up to spike the ball), the game forces the player to focus on timing; a poorly timed press of a button results in a weak hit or a smash into the net. While it is possible to manually direct one's partner towards or away from the net, she will generally move to cover whichever area the player has left empty. The game is one of the few to make use of the analog sensitivity of the face buttons on the Xbox controller, with a softer touch allowing one to barely hit the ball over the net. Winning a match provides money which can be used to buy swimsuits and accessories, either for oneself, or as gifts to bestow upon the other women. Alternately, players can also earn money through gambling at a casino located on the island.

The objective of Pool Hopping is relatively simply: while being timed, the player just needs to move their character from one side of the pool to other by jumping on the pink and yellow floating pads. To successfully hop to the next pad, players must conduct the correct jump to stop their girl from falling into the water; tapping a face button results in a short jump, holding it results in a long jump.

The faster they get to the other side of the pool, the higher the score will be, which in turn means the player earns more Zack dollars to spend. Bonus points can be gained for chaining jumps smoothly.

In addition to the core volleyball mechanic, the game features a relationship system between the various women on the island. Through gifts and skillful play, players can induce other characters to increase their esteem and positive feelings toward the character being played. A positive relationship with one's partner can translate into better performance during a volleyball match, while strong relationships with the other women leads to opportunities for new partners. Conversely, negative feelings from a partner can lead to missteps on the court, or can lead to gifts being thrown away unopened.

For unexplained reasons, the Dead or Alive characters' previous rivalries were reduced to a general dislike in this title. As a result, even characters who would normally try to kill each other (such as Ayane and Kasumi, as well as Christie and Helena) can become fast friends through a brief exchange of gifts.

Each of the playable characters has her own likes and dislikes (documented in the game manual), which influence how likely she is to accept or be impressed by certain gifts. Favorable gifts include those based on her favorite food, favorite color, and hobbies.

A certain amount of controversy erupted following the announcement and subsequent release of the game. It was criticized for laying a thin veneer of respectability over computer rendered depictions of scantily-clad women, pandering to the lowest common denominator.

Nonetheless, many reviewers were impressed at the depth of the volleyball game, as well as with the quality of the animation. As a result, review scores ranged from very high to quite mediocre. In its review, Edge magazine focused on the game's unusual social, rather than adversarial, focus.

In the April 2003 edition (issue #165) of the videogame publication Electronic Gaming Monthly, the magazine revealed a "nude code" for Xtreme, as an April Fool's day joke. The magazine promised readers they could play the game with the girls topless, in an unlockable nude mode, and also implied that this was the reason for the game's M-rating. Upon discovering the nude code was a hoax, many readers sent angry letters to EGM, despite the fact that such jokes and hoaxes are an annual tradition for EGM.

Although the "nude code" is not actually available in the official release, it has been added to pirated versions where a nude "skin" replaces the bikinis. However, the bows and strings of the suits are 3D objects and therefore require an additional hack to remove, without which they appear to be stuck or fused directly to the skin of the characters. Without such software modifications, the closest one can get to actual nudity is by using a camera trick along with a visor accessory, but even this shows only "stars" in place of any sensitive areas.

A Dead or Alive Xtreme manga was released in Japan. This black and white manga takes place in the Dead or Alive universe, covering the beach volleyball tournament. All of the girls are present in a large variety of cute swimsuits from the game. As with the game, there is no nudity in the manga so it is safe for younger readers. Also included are four bonus full-color illustrations. 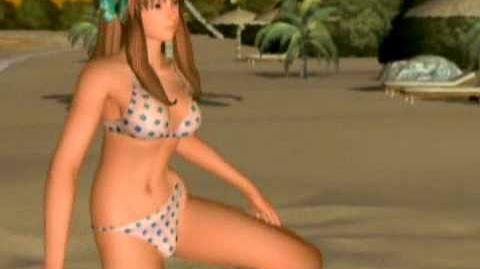