Dead or Alive Wiki
Register
Don't have an account?
Sign In
Advertisement
in: Featured articles, Games, Arcade Games,
and 2 more

It was followed by Dead or Alive 5 Last Round in February 2015.

On April 28, 2013, a new Dead or Alive 5 project for the PlayStation 3 and Xbox 360 and was teased. The trailer revealed the addition of Momiji and a Ninja Gaiden themed stage, Sky City Tokyo.

On May 7, the name of the new game was revealed to be Dead or Alive 5 Ultimate. The game will be released in September 2013, and will include the new additions from Dead or Alive 5+, including the tutorial mode, custom soundtracks, and new costumes. On May 9, another new trailer showed a battle between Kasumi and Momiji. At the end, there is a snippet of Leon in the desert. On May 21st, Famitsu revealed the return of Ein, the addition of Virtua Fighter's Jacky Bryant, and the Lost World stage from Dead or Alive 3. New screenshots released May 23rd also showed the return of the Forest stage.

On June 3rd, it was clarified that Dead or Alive 5 Ultimate will not be able to fight against the original Dead or Alive 5 or Plus online, because of new moves such as the Power Launcher and changes to netcode. A new trailer shown June 11th confirmed Leon and the Desert Wasteland stage, Rachel from Ninja Gaiden and the new Aircraft Carrier stage, and many new costumes. After revealing Leon and Rachel, Ultimate's roster has been fully announced.[1] On June 23rd, it was confirmed that the Custom Soundtrack will also include BGM from Dead or Alive 2 and Dead or Alive 3 (in addition to 4 and 5 in Plus), and that online 2v2 Tag Mode will be included.[2]

Note: These characters are DLC in the console versions and fully playable in the arcade version.

Note: All characters are unlocked from the start. As Story Mode is unchanged, the new characters don't have their own chapters.[4] Marie Rose was added to console versions as DLC in March 2014, Phase 4 was added in June 2014,and Nyotengu was added in September 2014.

Returning from Dead or Alive 5

All stages are available from the start, except in the Core Fighters release where some must be unlocked:

Most characters received one new costume, with Ayane, Hitomi, Kasumi, Kokoro, Leifang and Tina receiving two. The "training dummy" outfits from Dead or Alive 5+ are included, and several more costumes are available as DLC.

Downloadable content purchased for Dead or Alive 5 will work in Ultimate. Some costumes that were previously DLC are included as unlockables:[5]

Preorders of the Japanese version included a new set of pop idol costumes, chosen by popular vote.[6] All preorders included Team D (Kasumi and Ayane), and depending on the retailer, either Team O (Hitomi, Kokoro, Leifang and Mila) or Team A (Christie, Helena, Lisa, Momiji, Rachel and Tina). In North America, preorders from GameStop included Teams D and A, while Amazon included Team O.

Those who purchase first-print versions of the game Musou Orochi 2 Ultimate will receive a downloadable serial code for Warriors Orochi-inspired costumes for the following characters:

As there is no Xbox 360 version of Musou Orochi 2 Ultimate, these costumes were made available later on the Japanese Xbox Marketplace, followed by an international release.

Previously in 2012, the series' producer Yosuke Hayashi has stated they will not be releasing additional characters or stages as DLC for the original version of DOA5, as Team Ninja views it as unfair to players who cannot afford to pay for the DLC and because it will make it harder to balance the game.[7] A teaser trailer showing Momiji in a new version of DOA5 was shown on April 28, 2013 at a Playse event in Tokyo.[8] On May 8, Famitsu revealed it as Dead or Alive 5 Ultimate, set to be released sometime in fall 2013, and to include all of new content from Dead or Alive 5 Plus and to feature more characters and stages. Later that same month, the launch date was announced as September 3, 2013.

The game's director Yohei Shimbori said: "Since we launched Dead or Alive 5, we received a lot of feedback from fans around the world. DoA5 Ultimate is a reflection of that feedback we received." He added: "We received a lot of feedback on stages, and we've really heard our fans loud and clear on what they wanted." The most requested stages to make a comeback included the Forest and Lost World stages from Dead or Alive 3; another popular request was for a stage with an uneven grounding, resulting in the creation of the Desert Wasteland stage. Team Ninja has held contests to design DLC costumes.[9][10]

Dead or Alive 5 Ultimate is available as both a retail title and digital download.

A free-to-play version titled Dead or Alive 5 Ultimate: Core Fighters is available on the PlayStation Store.[11] Players are limited to four characters; Kasumi, Ayane, Ryu Hayabusa, and Hayate. The rest can be purchased for $3.99 each, or as a bundle for $34.99. Marie Rose was the first to be sold alone for $5.99.

All modes are available, except for Story Mode, which can be purchased for $14.99. Players of Core Fighters are able to fight against those with the full version in online matches. There are no plans to make this available on Xbox 360.

The standard Japanese Collector's Edition retails for ¥11,340, and includes "Ultimate Sexy Costumes" download code for fourteen characters, the DEAD OR ALIVE 5 Original Soundtrack vol.3 CD, and a "Kasumi-chan Blue" mousepad.[12] It also includes a Momiji mousepad, as well as two bathroom posters depicting Momiji and Kasumi in their Marlin and Violet bikinis, respectively.[13]

It has recently been announced that in Japan, Dead or Alive 5 Ultimate will be made available in arcades.[14] It will run on Sega's RingEdge 2 hardware, and be distributed digitally through the ALL.NET+ Multi Ver. 2 network. This will be the first arcade release for the series since Dead or Alive 2 Millennium in January 2000. This version will also include a new character, Marie Rose. Phase 4, another new character, was added in Spring 2014, with Nyotengu to follow in June.

Before the game's release, Dead or Alive 5 Ultimate was given "Best Fighting Game" by PSU's Gamescom 2013 Awards.[15] 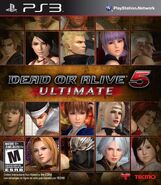 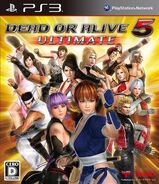 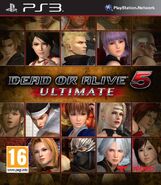