Alongside the standard edition of Dead or Alive 5, Tecmo Koei and Team Ninja released a special version of the game called the Dead or Alive 5 Collectors Edition.

In western territories - including the US and Europe - the Collectors Edition comes with:

The Japanese Collectors Edition is slightly different from the edition available to the rest of the world, featuring two new items. It will include: 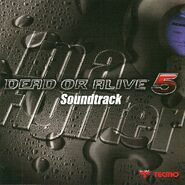 The cover of the soundtrack