DOA: Dead or Alive is a 2006 martial arts film based on the Dead or Alive series, and was released worldwide in September, 2006 with a Japan release on February 10, 2007 and a limited-release in North America on June 15, 2007. It was made available on DVD in September 2007. Directed by Corey Yuen, the film has various appearances from characters of the game series. The film received generally negative reviews and is considered to be the one of the worst films ever made.

The film opens Ryu Hayabusa informing Kasumi of the death of her brother, Hayate and that she must become the leader of their clan. Unwilling to believe Hayabusa's words without seeing evidence of her brother's death, Kasumi desides to leave her temple to find Hayate. Ayane, a kunoichi of the clan, warns her that if she leaves, she is honor-bound to kill Kasumi, but the princess leaves anyway and becomes a runaway shinobi. As she is jumping the wall of the temple, Kasumi catches a flying shuriken on which the words "You are invited to DOA" appear, inviting her to the Dead or Alive Tournament.

Meanwhile, Tina Armstrong is on her yacht out on the South China sea, arguing with her father, Bass on the phone about her career: he wants her to continue pro-wrestling, but Tina is tired of being "a fake" and what's to prove she can fight for real. A gang of pirates pull alongside her boat, but Tina defeats them as a DOA-shuriken pierces the side of her boat.

In Hong Kong, Christie Allen is found by the police in her hotel room and being questioned about the theft of cash and diamonds from another hotel, after they were tipped off by Christie's on-off boyfriend and partner-in-crime, Max (possibly so he can have the money to himself.) She manages to disarm and defeat all of them, and then leaves the building, driving off on a motorcycle as she receives her own shuriken. All the while, she is observed by Max.

The three girls are amongst a number of fighters - including Bass, Hayabusa, Leon, Gen Fu, Bayman, Zack, Leifang, Brad Wong, Jann Lee, Eliot, and Max (who, while not a real fighter, managed to get himself into the tournament) - to the invited Dead or Alive Island where they meet Helena Douglas, the daughter of the late Fame Douglas, the tournament's creator, and Dr. Victor Donovan, the organizer of the tournament, who explains about the $10 million prize money, and the history about the tournament.

Each fighter is analyzed in a lab - overseen by Donovan's head scientist, Weatherby - to record their strength, are all injected with nanobots which record their abilities, and are issued with ID bracelets, which show the name of their next opponent in the tournament.

The next day, the confrontations begin; Christie wins her first round against Jann Lee, Helena wins against Hitomi, Hayabusa wins against Eliot, Bayman wins against Brad, Gen Fu wins against Leifang, and Max fakes an injury so Zack went through to the next round.

Before her first round fight, Donovan explains to Kasumi that Hayate was defeated by Leon the previous year, falling from the top of a cliff and his body never to be found. After some more reflection, Kasumi realises that Leon couldn't have killed her brother and believes Donovan is lying. After telling Hayabusa, he offers to help her find out the truth. Later, Kasumi finds herself also matched against Leon; however, she soon defeats him, proving to herself that if she can win so easily, Leon could not possibly have beaten Hayate.

During the first night on the island, Max and Christie make on plan to steal over $100 million from the Douglas's family vault somewhere on the island, but they only have one source to follow on: "Helena is the key".

The next day, after Tina wins her fight round match against Bass, all the combatants take a time-out on the beach to let off steam. A volleyball tournament takes place down on the beach with Kasumi and Tina against Helena and Christie. Meanwhile, Hayabusa explores Donovan's compound for information about Hayate, but is soon captured by the building's booby traps. At the beach, the game abruptly ends when the ball is struck down by a throwing star and Kasumi realizes that Ayane is calling her out.

Ayane and Kasumi fight each other in the bamboo treetops, where Kasumi pleads for Ayane's help to find Hayate, pointing out that when he deserted the clan, she never pursued him out of love. Ayane coldly replies that he was different, and that Kasumi should come to terms with his death. Their confrontation ends with the arrival of the other girls searching for Kasumi, prompting Ayane to flee.

With recreation time over, the tournament resumes with Tina being matched against Zack. The two fight at the forbidden square and Tina defeats him. The result leaves a showdown between Helena and Christie. In a dramatic beach fight in the rain, Christie notices a tattoo on the back of Helena's neck. Despite being caught off-guard by the image, Christie still manages to overpower Helena, progressing to the semi-finals of the tournament. Returning to Max, she recalls and deciphers the cryptic image, revealing the code and showing the location of the vault to be in a Buddha head statue. With a new round beginning the following day, Tina, Christie, and Kasumi go looking for Hayabusa at Donovan's compound. However, they themselves fall into a trap and are also captured.

Weatherby, who has fallen in love with Helena, reveals that Donovan wanted to use his technology to take it in "a new direction", and he and Fame got into a argument about it. Since Fame had objected to the idea, Donovan had him killed by Bayman. Helena gains new resolve to stop Donovan.

It is revealed that Donovan is planning to harvest the nanobots from the four best fighters, creating "The Dead or Alive Program": a bio-technology where the host will be able to predict and adapt to any fighting style, and therefore defeat any combatant. The technology had been Weatherby's, who had no idea Donovan would use it against fighters' wills, as well as for profit. Donovan downloads the program onto special sunglasses, reveals to the four captured fighters that he captured Hayate a year ago, as he was the world's greatest fighter. He challenges Hayate to one fight, to try and win the other's freedom, but the program allows him to effectively predict every move Hayate makes. Hayate falls through the floors of the building, but is saved by Ayane, and the two lovers are happily reunited. Just as Donovan is about to send the program to buyers across the globe, Weatherby and Helena prevent Donovan from broadcasting and contacts the CIA. Meanwhile, Max finds the vault and breaks the code, but is interrupted by Bayman, who under Donovan's command, knocks out Max and takes the cash.

Helena confronts Donovan as he tries to flee, and manages to hold him off for a short time as tries Weatherby unlocks the harvest pods but fails, and Donovan sets the compound on irreversible self-destruct. Weatherby finally unlocks the harvest pods, and with all the fighters freed, the girls join forces to take on Donovan as he attempts to escape in a four-on-one fight.

Hayabusa fends off Bayman with the help of Weatherby and Max, and soon Hayate and Ayane join the fight against Donovan. After a tough fight, Christie manages to knock off Donovan's glasses, preventing him from using the program. Kasumi finish him off by paralyzing him with a needle to the neck.

In the final moments, all the combatants jump off the cliff into the water, whilst Weatherby, Max and Hayabusa take an escape hatch. The compound explodes, presumably killing Donovan. Managing to gain a boat (humorously, from the same pirates that attacked Tina earlier in the movie), the group escapes the island. One week after the tournament, back at Kasumi's palace, the five female fighters join forces against the warrior guards on the steps of the palace.

Lisa Hamilton, Kokoro, Bankotsubo and Raidou are only a few of the original Dead or Alive cast mates that didn't make it into the movie, while two new characters were made just for the movie: Max, who helps Christie on her mission to steal the money and Weatherby, who acts as a love interest for Helena.

The film was released first in a number of markets during September 2006 including the United Kingdom, Australia, and the Philippines. The BBFC rated it 15, IFCO rated it 15A and OFLC rated it M. All Canadian provinces gave it a PG except for Quebec which gave it a G with warning, and the MPAA gave it a PG-13.

The film was released in North America on June 15, 2007, without press screenings. In the UK and in Australia, the film is available on DVD and features a "Making of" documentary and deleted scenes. (There is no DVD commentary on the UK release) There are two covers for the DVD; one exclusive to online store Play.com and the original cover in most retail shops.

The movie received negative reviews, only receiving a rating of 34% on Rotten Tomatoes based on 41 reviews. It was voted number 10 on Gametrailers's "Worst Video Game Movie" countdown. Fans of the Dead or Alive games, however, are split down the middle about the film's quality. Some feel it embodied the series well and was a respectable action flick, whereas others criticized the confusing narrative, with a plot that lacks accuracy to that of the games, and missing characters. 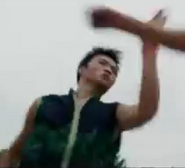