Beach Flags, or Flag Racing, is the name of a racing game in Dead or Alive Xtreme 2, Dead or Alive Paradise, and Dead or Alive Xtreme 3 (both in Fortune and in Venus). While simple in nature, it can be quite difficult and frustrating; it requires the player to repeatedly press a button as fast as possible in order to reach a flag at the end of the beach before their opponent does. It is often playable at Niki Beach, Tranquil Beach, or Bass Island.

To run, the player must repeatedly press

. To successfully grab the flag, the player must not only be fast, but also correctly judge the distance before pressing the "dive" button:

. If the player is too slow, falls short, or overshoots the flag, they lose. False starts also result in an instant loss.

The more points you have, the more Zack Dollars you earn. If you download the patch for Dead or Alive Xtreme 2, the points earned will be increased. Points are as follows:

Gameplay in Paradise is the same as Xtreme 2, however the run button is the

button and the "dive" button is the

button. It is a unlockable game; the player must accumulate a total of 50 "Venus Clips" to get it. 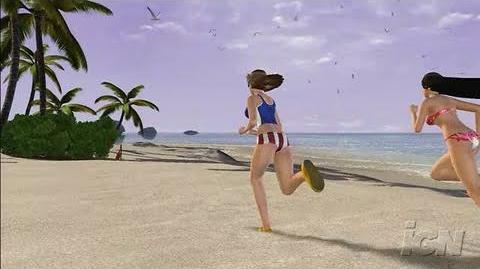